I’m now one week out from having the septorhinoplasty! I am pleased to report that in general things have been proceeding smoothly and according to expectations.

Bruising and swelling-wise, I looked pretty horrendous as of this past Thursday. I had a very puffy face and some alarming purple lines under each of my eyes; as of this writing most of that has subsided, though there is some puffiness and yellow bruising still. For a while there though there was such puffiness around my eyes that I looked like some sort of hybrid offspring of a Cardassian and a Tellarite. I am glad to have NOT taken any actual pictures of that, but by Saturday I was asked for a pic, and took this one to show folks on Facebook. 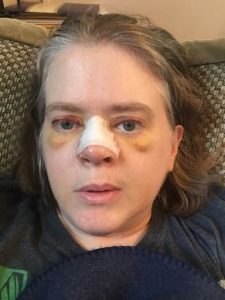 Note also that this pic is after the exterior splint on my nose popped off–which was a little alarming! But it was a bit of molded plastic that was mostly there to serve as a visual indicator to people to be wary of my nose. And given Dara was spending a large amount of time this past week doing cold compresses against my eyes to keep the swelling under control, a lot of moisture got under that splint. Likewise from the vaporizer we set by the recliner in the living room, since I’ve spent the last week sleeping in the recliner so as to keep my head elevated.

So Dara called in about the splint thing, and the nurse assured her that it was nothing to worry about; apparently, for these procedures, the splint just coming off like that is a thing that can sometimes happen.

This has meant though that the bandages are more exposed, which is what you see in the picture above. And even though I was able to stop the cold compresses once we were past the 72-hour window, the bandages still got exposure to some moisture. That aforementioned vaporizer (which excellent idea I attribute to MOO and DW friend eeyorerin, who has gone through similar procedures and who told me about her penguin-shaped vaporizer) was a blessing, but it also meant that I was in that recliner getting vapor on my face for multiple hours in a row overnight. Meanwhile Dara’s also been putting vaseline on the end of my nose to help keep it from drying out, and that too has also been impacting the bandages.

I was warned that the itching would start to drive me bats. I was warned correctly. It has been a very delicate sort of itching, but it’s still AUGH MY NOSE IS ITCHING and I can’t properly scratch it yet. I also can’t properly blow my nose either because the splints are still in there. best I can do is very gently touch my nose, which helps some but does not make the itch go away. Dara’s also been getting me the same icepacks we were using for compression before, since cold does help the problem a bit as well.

I have had to do a lot of saline rinses of my nose, both for moisture and for keeping it clean. After a week of this I have a strong taste of salt in my mouth, to wit, bleah.

But in another hour or so, I will be heading out to the one-week followup. At which, hopefully, they will tell me they can take off both bandages and splints. I will be asking them as well if:

Now at least though I’m to the point of being able to work from home. Which gives me something to do. I mean, I like playing Dungeon Boss and Gummy Drop, but it’s better to have actual work to do. 😀 I’ve actually been working over our VPN today–and given that May Day is set to be particularly lively, it’s a very good day to not have to be in downtown Seattle.

More to come after the appointment, and I’ll let y’all know how my breathing improves!

fixing my nosemedical
May 1, 2017 by Angela Korra'ti