Dara has been on a big kick with the turn of the year to get rid of a lot of things we don’t need anymore, and this has rolled over onto me a bit to make the first week of 2017 one of solving a bunch of small problems.

How this was solved: Discovering that rdiff-backup wasn’t going to create a directory for me in the backup location if that directory didn’t already exist, unless I gave it a –create-full-path argument. Also discovering that scripts in cron.daily, cron.weekly, and cron.monthly should not actually be in cron format, unlike anything you put in cron.d. Once I figured out both of these things, I was finally able to get backups working properly.

Problem #2: My older laptop got unacceptably warm after a few minutes of use, particularly when booted into Windows 10.

How this was solved: Taking Winnowill apart, which let Dara not only give the inside a good cleaning, but ALSO let her discover that the goop that’s normally supposed to provide some conductivity between the CPUs and the heat sink had dried out. A lot of it had in fact crumbled away. So she ordered some new goop and put new layers of that on the CPUs, and then we put the machine back together.

This made the machine much happier when booting into Windows 10 and actually trying to do things in that OS.

In general this should also hopefully increase the lifespan of this machine. Given that I got it way back in 2007, and this box is still chugging along, that’s still a pretty impressive lifespan for a laptop. I was thinking of selling it, but Dara says she’d like to keep the box around just for the sake of having an older and still functional Mac. Eventually it might become our new Time Machine server if Elda gives up the ghost.

All of this did at least also give me a chance to take a picture of what the inside of Winnowill looks like! 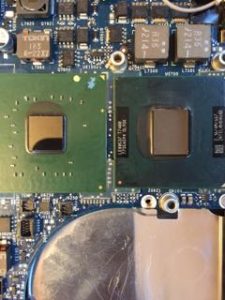 Problem #3: The cushion on the left ear of my Bluetooth headphones split a seam.

Apparently this is a thing with Jabra move headphones? A couple weeks ago I noticed that there was a split seam on this ear cushion, and when I googled for it, I found quite a few other users complaining about the same thing. This has happened often enough that Jabra sells replacement cushions, and the replacements are supposedly sewn and not glued. I ordered a pair of the replacements and got the new one for the left ear on there okay with Dara’s help. Keeping the cushion for the right side in reserve on the assumption that this will eventually happen on that side, too.

There are other things I’m in the middle of doing that are more domestic–replacing old bras and old jeans–and Dara and I will also be looking into replacing our mattress. But the techie problems are more interesting, so the post is about those!

Any problems y’all have solved so far with the new year?

Editing to add: By “goop” on the CPU I actually meant, of course, conductivity rather than insulation. Oops! Many thanks to for pointing that out.