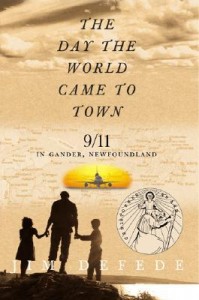 The Day the World Came to Town

Forgot to get this posted in a timely fashion, so here it is at least to finish off my book acquisitions for the previous year.

The Day the World Came to Town: 9/11 in Gander, Newfoundland, by Jim DeFede. Picked this up from the gift shop at the Seattle Rep, the night I saw the play Come From Away. Because I figured a) reading this was obligatory to better appreciate the play’s context, and b) the purchase would help support the Rep!

The Force Awakens, by Alan Dean Foster. This is the official novelization of the new Star Wars movie, which I wanted to pick up despite the ebook being pricier than I usually like. (The wait list on the library queue was unacceptably long, and I wanted to read it NOW.) I have in fact read this now as of this writing, and can report that while it was generally a straightforward adaptation of what we all saw on screen, there are a few additional details that I wish would have made it into the final theatrical cut.

And that puts me at 79 total for the year. Which is pretty low for me, historically!

gosh I have a lot of booksother people's books
January 1, 2016 by Angela Korra'ti