Traci Leigh Taylor is another member of NIWA, and my final Boosting the Signal feature today is her non-fiction work Voices from the Rainbow: a collection of letters and interviews from over fifty LGBTQ individuals who have spoken with Traci about their life experiences. I don’t normally feature non-fiction on Boosting the Signal, but obviously, this is a topic near and dear to my own heart. And I daresay any of my regular readers will realize that the struggle to gain acceptance in their lives is a goal pretty much all LGBTQ persons fight for. Traci has sent me a couple of letters from her work, under the title “So Many Lost Years”. 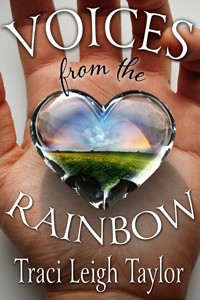 Voices from the Rainbow

I just came out last January. So at 58, I’m starting my life again. I wish that I could say I was one of those people who had family support while coming out, but I wasn’t. I knew I was gay in high school, but my best friend—who I was in love with—didn’t really accept gays and never knew how I felt. He kept pushing me to be straight.

Mom and Dad silently knew about me but we didn’t speak of such things out loud. Later, when I lived with my brother for a year, I knew they knew because they went through all my stuff including gay magazines I had. They still didn’t want to talk about it, but at least the jokes and comments about gays stopped. I was always taught that family came first, never say I don’t like it until I’ve tried it, always be a gentleman, and no matter what happens, never quit or give up. Dad and particularly Mom taught me to be very strong. With the family problems we have had, being strong has been very useful.

My mom and I grew very close when Dad died in 2005. She started opening up to me about some of the hell she had gone through with Dad and his family. I put my life on hold until July 2009, when I lost Mom. My mom was always my best friend, and there isn’t a day goes by that I don’t miss her. In fact, I think I miss her more everyday than I did before.

I came out this January to my family and friends. My friends were great but my sister told me it was okay as long as I didn’t talk about it or do anything about it. I’ve stopped going to dinner at my sister’s for things like Thanksgiving and Christmas because I might say something in front of her friends that she would not approve of. I am being told that I’m not worth it by my family, that I’m not to look for love let alone sex or companionship. I wish my sister could be a quarter of whom and what you are. Then maybe my life wouldn’t have crumbled in some of the places it did.

So here I am 58 and alone. I wish I could have come out when I was young, and I could have been loved and accepted for who I am. Perhaps my life could have been different. I have never had a relationship. It is getting harder all the time physically and emotionally, and I am running out of strength.

I am working hard to make myself a better person, emotionally and physically. I joined a gym club and I’m currently working with a trainer three times a week as well as going there on days in between my booked sessions. Hopefully it will make me better, so that somebody will take notice of me. I would like to meet a good person to share my life with.

Well, another year has just about passed, and once again I sit alone in the dark trying to make sense of my life, or lack thereof. I wonder if this hole in my heart and darkness in my soul will ever be cured.

I needed for you guys to know who I was, but I was afraid to tell you. I gave you ample opportunity to learn about me by telling you that you could ask me anything about my life and that I would give you an honest answer. There was a most pressing question which you should have asked me but you didn’t. Since you didn’t ask when you could have heard the answer, I will tell you now: Mom and Dad, I am gay.

Yes, you heard right—your youngest son is gay. I know you must have known. When I came home from Calgary you had been through my room, straightened it up, and put all of my gay magazines in a box in my nightstand. Why couldn’t you have asked me instead of leaving me to live in a quiet torture of not knowing what was going to happen if it just happened to stumble out and had not really been addressed? If you were afraid that, like my older brother and sister, I wouldn’t stay and love you and take care of you two when you were old and sick, then you never really knew me. I was there because I loved both of you more than my own life.

It would have been wonderful if I could have found someone to love me. If they ever turned their back on you two then I wouldn’t have wanted them in my life. Now it’s too late for me. I’m 58, and nobody out there wants me and my dog. You don’t know how many times I wanted to be hugged and kissed and made to feel that I’m not just taking up space and air.

Being gay isn’t just about sex—it’s about someone to share your world with. So here we go towards another new year, and I’m still waiting for my life to start which it should have done forty years ago. I am now so old that no one wants me. I have to sit and watch the world pass me by and wonder what it might have been like.

Your gay son still loves you with all of his heart.

I love you and miss you,