Sorry, Amazon, I’m not getting in on your slapfight

As y’all know, I’ve elected to self-publish Faerie Blood via as many channels available to me, in the name of not limiting myself to a single channel. Even though the vast majority of my sales are on Amazon, as I’ve posted about before.

Tonight, I’ve just received a mass email that Amazon’s apparently sent out to all the KDP authors, asking us to email Hachette on their behalf in their ongoing dispute. (KDP, for those of you who don’t know, is Kindle Direct Publishing. It’s the system for authors to self-pub their stuff to the Kindle.) And I’m pulling my jaw back up off the floor as I’m trying to figure out what exactly Amazon thinks this is going to accomplish.

The first big thing that boggles me about this is this money quote:

We recognize that writers reasonably want to be left out of a dispute between large companies.

Yes. YES WE DO. So why am I getting email about this?

Because seriously, aside from any question of where I stand on this particular dispute (about which I have already posted), exactly how many fucks is Hachette supposed to give about what the self-published crowd has to say on this matter? We’re not making them any money, after all. We’re not their authors.

Amazon appears to be assuming that KDP authors are naturally going to side with them on this, too, if they’re actually going to the trouble to email us. That is not a good assumption to make. Because y’all know what Tolkien has to say about going to the elves for counsel, right?

Moreover, I can’t help but flash to the episode of Avatar: The Legend of Korra, that we just watched tonight, “Old Wounds”. There’s a scene towards the end of that, wherein Lin Beifong has it out with her sister Su over old family history–and the fight is brought to an abrupt halt when Su’s daughter Opal whips out her airbending, and chastises the two older women. “You’re sisters! Why do you want to hurt each other?” 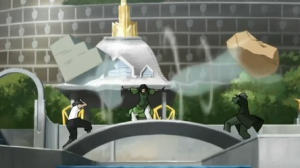 ‘Cause okay yeah fine I’m with Amazon on this part:

We want lower e-book prices. Hachette does not. Many e-books are being released at $14.99 and even $19.99. That is unjustifiably high for an e-book. With an e-book, there’s no printing, no over-printing, no need to forecast, no returns, no lost sales due to out of stock, no warehousing costs, no transportation costs, and there is no secondary market – e-books cannot be resold as used books. E-books can and should be less expensive.

Speaking with my reader hat on, yes. I think $14.99 is stupidly high for an ebook, and I’m very reluctant to put down that kind of money for one, even for my top favorite authors, even though I have disposal income and a real big yen for ebooks. $12.99 is the very top of the price range I’m willing to semi-regularly consider. And given that there are hundreds of other ebooks I also want to read that I can get for $7.99, I’m a lot more inclined to wait until the ebook price drops before I buy it.

But speaking with my writer hat on:

I’m really not cool with turning off buy buttons on authors’ books when you’re in a dispute with their publisher. I’m really not cool with passive-aggressive messaging to the basic effect of “we can’t get this book for you right now, maybe we MIGHT get it in another 2-3 weeks”. And I’m really not cool with trying to distract people looking for Hachette titles–“we can’t get you this title so how about this one over here?” No. No. And NO. If I’m a customer coming to a site looking for a particular ebook, and you’re going to waffle at me about how it’s not available right now and you MIGHT be able to get it for me in a few weeks, y’know what I’m going to do?

Go buy it from Kobo or Barnes and Noble. And if I want it in print, I’m going to Third Place.

Scalzi is not impressed with this maneuver on Amazon’s part and reminds us all that Amazon is acting in its own best interests, not those of authors or readers.

ETA #2: Housemate Paul, when I mentioned to him that Amazon had pulled this stunt and how I was boggling about it, told me that he knew pretty much only that Amazon and Hachette were having a dispute, full stop. I explained that the fight was about ebook prices and that while I agree with Amazon on how prices for ebooks are often too high, I don’t like Amazon’s tactics against Hachette authors in this. Paul drew the parallel here of a grocery store trying to force a dog food company to lower prices on its dog food, and yeah, I can see that. Meanwhile, the customer comes in looking for dog food, and the store is all “well we can’t sell you this dog food, and we can’t get this brand of dog food for another three weeks, how about a nice sack of charcoal briquettes instead?”

And the customer, who has no idea whatsoever why the store is fighting it out with the dog food company, goes to the dog food aisle and does not see the dog food she came in there for in the first place. “Crap,” the customer thinks, “now I’m going to have to drive to another store.”

Because at the end of the day, all she wants is to feed her dog.

ETA #4: I just had this link brought to my attention–some interesting analysis of where exactly Amazon and Hachette are coming from in this ongoing spat between them. Refreshingly neutral in tone. Check it out.

ETA #5: One more link with some analysis, over here. Starts with calling Amazon out for erroneously invoking Orwell in the mail that went to KDP authors.

Updates on the Ellora’s Cave vs. Dear Author lawsuit

When not to engage with art