I give an awful lot of fangirling time to Le Vent du Nord, De Temps Antan, and the Charbonniers, it’s true–but there is a lot more to be found in the genre of Quebecois trad, and I’ve got quite a few other groups represented in my collection at this point. One of these is Bon Débarras, who Dara and I had the pleasure of seeing perform at last year’s Festival du Bois. They are a very lively trio, melding American and Quebecois influences to form a distinct sound all their own. It’s very worth seeing them perform live, since Dominic Desrochers is an excellent dancer. But if you can’t pull off getting to a show, their albums are the next best thing! 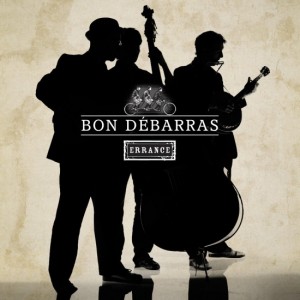 Their second album Errance has just dropped, and I am delighted to report that I enjoyed the hell out of it. You’ll find those American influences I mentioned all over this album–things like using a washboard for percussion as much as they do the feet. Or their vocal style, which rings very familiar to my Midwest-bred ears despite the lyrics being in French; I hear a lot of echoes of country or bluegrass or rockabilly in their singing. Or the particular mix of instrumentation, particularly banjo and harmonica, which carries the same sort of echoes for me as the vocals.

Track-by-track reactions behind the fold!

“Reel facile”: Very strong start right out of the gate. Tight harmony on the lyrics, and they do fun things with layering in their vocals, too. Funkalicious harmonica and banjo action going on here.

“Ô yaille! (Tu m’fais faire la gigue)”: They get some washboard fun going on in here along with the harmonica, and the vocals really get into it, almost reggae-like in the choruses, on the bits where they’re singing “tu m’fais faire le gigue”. And any fan of De Temps Antan will certainly tell you that harmonica solos are awesome. No exception on the one in this song.

“Tombouctouche”: This starts off with a deep intonation from the standup bass while the banjo lays down some rhythm, and then you get some soft turlutte layered in over the top of that. Understated beginning to this track compared to the two before, and the track in general is rather more laid back. There’s some nicely complex fingerwork on the banjo in here, alternating between the turluttes. Listen for the tempo to pick up towards the end, too.

“Chanson du forçat (Introduction)”: As soon as this track started on my first listen through, it got my attention hard. Great harmony, with what sounds like chains in the background laying down a tempo for a very chain-gang feel. Which, given that the title translates to “song of the convict”, is absolutely appropriate. And this segues right into…

“Chanson du forçat”: More up-tempo here, with some of the same percussion and harmony of the intro sped up and melded with the banjo. Very, very cool. The banjo rocks. And the outro with the harmony and rhythm… nice.

“Vagancia”: Big change of mood here, swinging over to an almost delicate little instrumental. And ah hello there mouth harp, I hear you in there! Some delicious support from the double-bass, too.

“La vie du bon côté”: This starts off with, of all things, what sounds like an old-timey piano. Then audience noise and a countoff leads into some mellow lyrics–almost deceptively so, because after the second verse the pace picks up considerably! A fiery accordion solo rocks the hell out of the middle of the track, and oh man that final a capella chorus! Swoon! Especially the deeper singing! Bien fait, les gars! Audience noise on the tail end, too, so one presumes this is a live track.

“Ti-galop pour la pointe-aux-pins”: Despite this starting off with a strong punch of harmony, this is actually mostly an instrumental. Accordion-driven, but with a few interjections from the bass and piano as well. Vocals come back in a couple of places briefly–reminding me actually of Great Big Sea, actually, who also have a habit of dropping outbursts of vocals into the middle of their instrumentals. And! There’s some appearances of what sound like clarinet (or maybe a soprano sax?) and trombone here, maybe. Fun!

“Lettre à mon père”: I can tell I’ve listened to a lot of Quebec music when I’m going through a new album and catch myself thinking “oh hey I’ve heard this turlutte before!” Which is exactly what struck me on the latter half of this song. It starts off slowly and sweetly, almost wistfully, with the vocals supported by minimal bass and accordion. But about two and a half minutes in, we get the turlutte fun, and it totally sounded familiar to me as soon as it kicked in earnest. Or at least the A part did, anyway; there’s a B part that didn’t sound as familiar. The A part I totally recognized from Les Charbonniers de l’Enfer’s album “À la grâce de Dieu”, and in particular the very tail end of the track “Margotte”.

“Bercitude”: This is another lower-key song, starting with muted lyrics on top of a noise that sounds either like a rocking chair or perhaps the creaking of a boat on the water; I’m not sure which. Then some lovely instrumentation kicks in, soft and flowing. It’s lullaby-like, almost. (Though my French isn’t good enough yet to know if “Bercitude” is related to the word “berceuse”, which does in fact mean “lullaby”, so I couldn’t necessarily tell you if that’s the entire point here.) But it builds up some strength as the song proceeds, with the vocals getting stronger on top of the banjo and other instruments and letting the turlutte build until it fades back down again to let the guitar take over, and finally return us to the muted lyrics and rocking noises.

“Le temps passe”: Oh, NOW we’re TALKING. 😀 This is one of the songs the band did when we saw them at Festival du Bois, and it’s serious fun. Body percussion with some almost rap-like low singing, lyrics and mouth music alike, open this track for some goddamn business. This is a real chair-bouncer, and if you see them live, it’s a get the hell up and dance song. Very rap-like through most of the lyrics, too.

“Valse de l’infinitif”: One more lower-key song here, with a title that makes me giggle just a bit since my brain tries to translate it as “waltz of the infinitive”, and I keep wondering how grammar comes into it. BUT! It’s a nice little song, sweetly sung, and I do quite like the banjo’s rhythm chords. A bit more horn action shows up here, subtly, along with hummed chords in the middle stretch that finally get accompanied by accordion and piano.

“Chien fidèle”: YES! This was hands down the most fun song Dara and I saw the group perform at Festival du Bois, the song about the singer’s dog dying, which you would think would be a cause for lament. And certainly the song starts off with plaintive harmonica and mournful dog howls out of one of the guys–but don’t let that deceive you. What does our poor dog-less singer do, once his poor chien fidèle dies, but dance a jig on the hood of the car that kills him! To wit: awesome. Bring in the clapping, and the foot-stomping rhythm, getting more and more energy with each verse, and more and more percussive noises to add to the overall feel of stomping the hell out of that car hood. I love the overall point here: if something makes you sad, go dance all over it! The song ends a bit abruptly, but that’s okay, because it’s just that awesome.

In conclusion: yep, if you’re interested in Quebec music at all, it’s worth your time to grab this album. It’s available for sale on the Canada iTunes store, the US iTunes store, and the Amazon US MP3 store. The group also has a Bandcamp page if you want to buy from them directly, but their new album isn’t up there yet, just the first one. (Still, you might want to grab that first album, too!)

And if you get a chance to see them perform, by all means, go for it! You’ll be glad you did!