For those of you just joining in, I’m geeking out yet again about The Silmarillion. We’re reading it in the weekly book club I go to, and since I’ve already read it multiple times, the group agreed I’d read it in French while everybody else reads it in English.

But since I need to doublecheck the English while I’m reading the French, this is a bilingual reread! Here I’ll talk about the Ainulindalë and the Valaquenta, as promised in my last post. Both of these strike me as good straightforward translations, as with the front matter of the book.

There aren’t any changes to the names of the Valar, or to the structure of the overall story of Arda’s creation. Nothing in these two sections stood out for me going through the French edition. I’ll have more linguistic comments to come for the Quenta Silmarillion, though!

As is the case every single time I read The Silmarillion, I’m amused about how much shit goes down in the world just because Melkor got initially pissy about not having a solo.

With Melkor, though, you glimpse a bit more than that. Particularly here:

Then Ilúvatar spoke, and he said: ‘Mighty are the Ainur, and mightiest among them is Melkor; but that he may know, and all the Ainur, that I am Ilúvatar, those things that ye have sung, I will show them forth, that ye may see what ye have done. And thou, Melkor, shalt see that no theme may be played that hath not its uttermost source in me, nor can any alter the music in my despite. For he that attempteth this shall prove but mine instrument in the devising of things more wonderful, which he himself hath not imagined.’

Then the Ainur were afraid, and they did not yet comprehend the words that were said to them; and Melkor was filled with shame, of which came secret anger.

There’s a heaping helping of “sit the fuck DOWN, son” from Ilúvatar here. And a re-interpretation of this story could easily work this smackdown into a more sympathetic portrayal of Melkor.

We noted repetition between the Ainulindalë and the Valaquenta, regarding identifying the Valar and their various domains. This, we felt, was certainly appropriate for the kind of Bible-like, mythic flavor Tolkien was going for. But on the other hand, as modern readers, the others found it repetitive to read. Stylistically appropriate, perhaps, but still repetitive.

This time through, I noticed how the Valar are very gender-essentialist. I proposed the amusing thought exercise of which ones would be good to gender-flip or make completely non-binary in a fan remix of this tale.

I’d be tempted to gender-flip Manwë and Varda, while keeping them a couple. And since Tolkien’s legendarium involves so much depth of language detail, I imagine their names shifting too. Manwa and Vardë, maybe.

It’d also be interesting to gender-flip Yavanna, just because she is a traditionally feminine archetype. Dara brought up that Redlance in Elfquest is an example of a character you could get by such a gender-flip.

One more thing I can say: I’m torn about Nienna. I like that she gets to be solitary. Yet particularly in this era of #MeToo and #TimesUp, I cannot help but notice that she is essentially the goddess of emotional labor. To wit: feh.

On the other hand, I also like what this says about Gandalf–who did after all begin his existence as Olórin, a Maia of Nienna. It makes him a Maia of emotional labor, and that’s actually kind of in keeping with what we always see Gandalf doing in The Lord of the Rings! It even gets called out right in the Valaquenta:

But of Olórin that tale does not speak; for though he loved the Elves, he walked among them unseen, or in form as one of them, and they did not know whence came the fair visions or the promptings of wisdom that he put into their hearts. In later days he was the friend of all the Children of Ilúvatar, and took pity on their sorrows; and those who listened to him awoke from despair and put away the imaginations of darkness.

Since I can’t read this book as a new reader, I asked for the group’s thoughts on whether these sections worked for them. This is because when I hear people talking about how hard a read The Silmarillion is, these are the bits they’re generally meaning.

The overall census was that the huge infodump of “here’s the creation of the world, and here’s all the Valar and what they do” is problematic. Plus, there’s a lot of tell vs. show: i.e., “Yavanna sure did like trees and animals, so she made those”, vs. actually showing Yavanna making those trees and animals.

Group member Alexis (hi Alexis!) noted that the infodump would have worked much better for her as an appendix to the main story. And that, if a story hooks her on characters and action, she’ll happily go read acres of infodump about them later. But not at the start of the story.

Next post: however many chapters of the Quenta Silmarillion will give me enough notes for a good post! 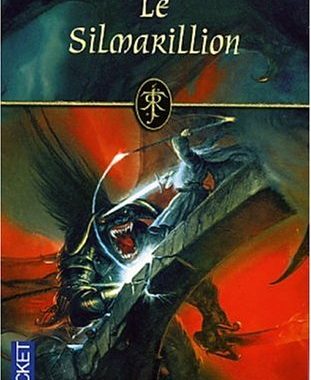