At the day job this afternoon, my team’s having a little party for our lead dev’s birthday! The theme is mustaches, so there are cookies and cupcakes with mustaches decorating them. And they brought in fake mustaches (the box for which was helpfully labelled EMERGENCY MUSTACHES, y’know, for all your whisker-impairment needs) for all of us to wear.

However, nobody said how we were supposed to wear them. This, ladies and gentlemen, is a QA engineer demonstrating ‘boundary testing’! 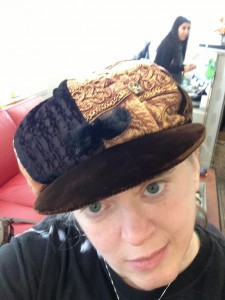 i love my jobmustache hatmustaches go on your headwork
March 22, 2013 by Angela Korra'ti