And now, last but not least, the notes for Chapter 10 of the German edition of The Hobbit!

The first challenging word that the German edition throws me is “Uferabfall”–which, if I break it down, gives me “Ufer” as “shore” and “Abfall” as “drop”. Google Translate is also trying to offer “waste” as a connotation for “Abfall”, but in context, “shore-drop” makes a lot more sense. Tolkien describes “a steep shoulder of land” in the original sentence, around which the river is flowing.

Here’s a nice strong compound noun: “Nachbarhäupter”! Google Translate calls this “neighboring chiefs”, but it appears in this sentence: “Die Nachbarhäupter im Nordosten und das dazwischen liegende tiefere Land konnte mann nicht erkennen.” This is the bit where Tolkien’s describing the nearest neighbors of the Lonely Mountain: “Its nearest neighbors to the North-East and the tumbled land that joined it to them could not be seen.” So I’m not sure of the connotation of “Nachbarhäupter” here, in reference to the surrounding mountains, unless it’s meant to underscore that they are in fact mountains, as opposed to dinky little hills.

A less challenging but still nonetheless amusing (at least, if you’re a Seattleite Great Big Sea fangirl who just saw them play in the venue of this name, which is to say, if you’re ME) word: “die Moore”. I.e., “the marshes/moors”.

The sentence I called out in the French section regarding comfort to Bilbo comes out rather differently in the German version, at least in the sense of syntax and structure. Here’s what it looks like in German:

What caught my eye in this sentence was “zähneklappernd”. Google thinks this means “chattering teeth” when I use it by itself, but in the context of the sentence, it thinks it’s “shivering”. Which is more in keeping with the original:

It might have been some comfort to Mr. Baggins shivering on the barrels, if he had known that news of this had reached Gandalf far away and given him great anxiety…

(Cutting off the English sentence, since that’s all that reflects the German translation. The translator, here, split up Tolkien’s longer sentence into smaller individual sentences. Which then got bigger by themselves, because, well, German does that!)

Noting only in the German that Tolkien did have a propensity for short exclamatory sentences for periodic emphasis–he does it twice in this chapter, in fact. “The Lonely Mountain!” “The Long Lake!” Or in this edition, specifically, “Der Einsame Berg!” And, “Der Lange See!” (I rather like that “See” is the word for “Lake” here, though it can also mean “sea”. But given what Tolkien describes about the Long Lake, you could almost call it an inland sea anyway.)

Seeing a lot of references to what’s called the Forest River in English becoming “der Nachtwaldfluss” in German. Presumably the translator’s aiming for “Mirkwood River” here.

And oh hey look, here’s another example of the art in this edition that’s worth mentioning–because while it’s certainly not bad, and in fact is rather whimsical, I’m NOT seeing that this is supposed to be Lake-town given Tolkien’s description of the place. Doesn’t seem like it’d have nearly enough wood in the buildings! 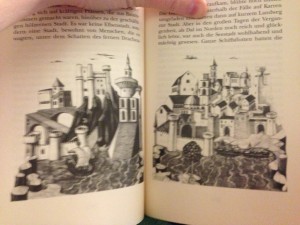 A reasonably easy word but one which just sounds cool: “Zwergenkönigen”. Which is, of course, “dwarf kings”! More specifically, “Zwergenkönigen des Gebirges”, “dwarf kings of the mountain”. Or at least, “dwarf-kings of the Mountain” is what Tolkien originally wrote. Poking at it further in Google Translate, I’m seeing that “Gebirges” could be “mountains” or “mountain range”. And I get a bit of fun intersection between my toddler knowledge of French and my squalling-infant knowledge of German with that “des” there, which is acting exactly like “des” does over in French, where I’d get “des montagnes”.

The translator does some sentence-splitting in the bit where Tolkien suggests that Bilbo has forgotten that he’s had it a bit better than the dwarves:

I particularly like the word “geatmet” there, which is the past participle of “atmen”, “to breathe”.

Also noting here that German, like French, seems to make use of a compound past tense. But it’s been too damned long since I studied German for me to remember whether there’s also a simple past tense form! I’ll have to dig out my old verb books.

Another random word I liked was “durchgeschüttelt”, which appears to be “shaken”. It appears in the description of what shape the other dwarves are in when Bilbo and Thorin start getting them out of the barrels.

Fili laments that “Mein Fass war eine Apfeltonne”. In the English he’s talking about the smell of apples in his barrel–“My tub was full of it”. But “Apfeltonne”, as near as I can tell, is “apple ton”. Is there an idiom going on here I’m not getting?

It doesn’t happen as much for me in German as it does in French, but hey, sometimes I do get entire German phrases! Like this one: “Mit der willigen Hilfe von Fili und Kili…” Which is a direct translation of Tolkien’s “With the willing help of Fili and Kili…”

Ah! In German, Thorin says that the dwarves must thank “unserm guten Stern”. Which does indeed appear to be “our lucky stars”.

And okay, Lake-town is “Die Seestadt”, of course.

I like the word “gelegentlichen”, which means “occasional”. Though my ear for French pronunication keeps trying to interfere with my ear for German pronunication, since I want to have the first part of this rhyming with “élégant”!

Hee, the German edition describes the “greybeards” and “gammers” of Lake-town as “die Graubärte” and “die Mütterchen”.

HA! I have only just now pinged off the word for dragon being “Drachen” and immediately slanting over to Drakken from Kim Possible. Now I’m going to have to work to NOT imagine Smaug with Drakken’s voice. Thanks, Der kleine Hobbit! I love you too!

The word “Auspackerei” jumped out at me, and after checking the English text as well as Google Translate, my best guess for this is “unpacking”. It looks like a noun form of the verb “auspacken”, but I don’t know how you get from “auspacken” to “Auspackerei”.

“Thorin, Sohn von Thrain, Sohn von Thror, König unter dem Berg” doesn’t flow the same way in German as it does in French. But on the other hand, it seems a bit more dwarvish in its rhythm!

“Ich bin zurückgekehrt,” on the other hand, sounds pretty awesome. “I have returned!” Yeah, I could see movie!Thorin intoning this all deep-voice and king-like and stuff.

I note that the German word for sick/ill is “krank”. I wonder if it’s related to the English word “cranky”? Looking that up in the dictionary, I do see that “cranky” has some lesser-used connotations of “shaky” or “weak”, so this seems like it might be feasible.

Amusingly, a few paragraphs later in the text when Thorin announces himself again, he says “Ich kehre zurück!” Tolkien did vary it up too, with the first occurrence being “I have come back” and the second being simply “I return”. It’s not clear to me though if “kehre” is a standalone verb here, or if it’s part of “zurückkehren”.

Hee, and here’s what the German translator has poor cold-having Bilbo mumbling to everybody in the midst of all these shenanigans: “Hersnichen Dang, beine Herrn!” I’m pretty certain the translator is aiming for “Herzlichen Dank, meine Herren!” here. (And I’m rather pleased that “Herzlichen” actually bumped up from somewhere in the very back of my brain, and I had to only do a bit of searching to confirm it.)

So in other words, as I said before, poor Bilbo!