END_OF_DOCUMENT_TOKEN_TO_BE_REPLACED

And now, to start documenting my and Dara’s recent excellent trip up to Victoria, to see Le Vent du Nord! Saturday the 8th was when the adventure got underway–when we headed up to Victoria in the morning, for the symphony show to take place that night!

END_OF_DOCUMENT_TOKEN_TO_BE_REPLACED

March 18, 2014 by Angela Korra'ti
About Me, Photos, Quebecois Music

Two more fun pics of me and De Temps Antan

Dara put up a few posts of her own detailing her POV of our adventures in Harrison Hot Springs, including a loverly picspam of various things we looked at. Including a couple of shots off of her camera of me and the boys of De Temps Antan!

I particularly like this one, of my reaction when I got called out for being a double agent for Le Vent du Nord, since I was wearing their T-shirt: Quebec Boys are Amused When I Explode from LOL

Go click over to Dara’s post to see the other one, of me and Éric Beaudry, current holder of the title of Anna’s Favorite Bouzouki Player from Quebec!

Not much more to report about the Harrison Hot Springs trip, but I do have enough to do a quick followup post!

I’d said in the previous post that there’d been an accident at the festival. Over on Facebook, Dejah threw me a link on a local paper’s website about the accident. The Agassiz-Harrison Observer reported that a family of four was involved, and that while there were some injuries and the father needed surgery, mostly everybody was more or less okay. Two vehicles were involved, and the driver of the SUV was arrested. (Dara and I and those with us at the second De Temps Antan show wound up seeing that SUV later, just after the concert. It was pretty badly banged up.)

After the DTA show on Sunday night, Dara and I took it pretty easy. We scampered over to one of the shops to get fudge (mmmmm fudge), and then saw the boys of the band, Dejah, Ginny, and Gary heading to dinner. Amused jokes were made about not stalking the band we SWEAR. And though everybody yelled farewells to us (I noted the good M. Brunet in particular yelling over in our direction), we left them to it since we wanted to hide in our B&B room for a while. And I had important pic-posting business to attend to!

We did later emerge for dinner of our own, though, and had Thai food on a restaurant balcony overlooking the lake. Our waiter turned out to be a bass player as well and Dara chatted with him a bit about the jam session we’d been informed would be happening at the lounge next door later that night. Dara did wind up hitting that jam session for a little bit, though I opted to take one last round of advantage of the jacuzzi in our room.

The next morning, we got up in a leisurely fashion, got our stuff all packed and ready to go, and headed west to Vancouver! On the way, heading along TC-1, I spotted a road sign that deeply amused us in our capacity as massive Elfquest fangirls.

(I mean, Clearbrook must live somewhere, right? Maybe this is the exit that leads to the Wolfrider Holt!) 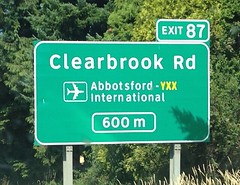 After that, we went over a toll bridge we’d been warned about and which we hoped would be clever enough to note that we were an American license plate, not a Canadian one, since we’d been told it worked by snapping photos of licenses and billing the drivers. We don’t know yet if we’ll get a bill from British Columbia, but guess we’ll find out! I did like one of the pics I got going over the bridge, though. 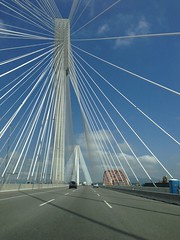 Our agenda in Vancouver was a couple of quick surgical strikes on places we wanted to get to, and the first of these was the Laser Cutter Cafe in Vancouver’s Chinatown. Because tea. And LASERS!

We had a pleasant chat with the guys in there, including a guy named Adrian who was selling his digital carving art via the cafe. And while we didn’t actually carve anything, it was cool to see the machines the guys had available and the various and sundry little things on shelves that had come out of them. I particularly liked the little Jiji from Kiki’s Delivery Service.

Dara even got to talk up her music a bit and one of the guys piped “Shout At the Desert” over the cafe’s sound system. To wit: awesome.

And just to be thorough we did in fact also have tea! Which was very welcome, given that we hadn’t had any tea at all in Harrison. Our room at the B&B had included some bag tea in the stock of breakfast foods we’d been provided–but none of it was stuff we’d wanted to drink, actually!

We left kind of earlier than we wanted to, since the place was pretty cool–but we didn’t want to run our parking meter out, and we did actually have to get back on the road in order to get home in time for dinner.

Not to mention that we needed lunch, and it was critical, critical we tell you, to stop at Siegels Bagels for our obligatory few dozen bagels to bring home. Because yum.

And our last stop was at the mall that Dara likes to call Chibi Akihabara, but which is actually called Yaohan. She wanted to pop in there on general principles but also to see if she could find a replacement holder for her passport. She did not. What was kind of lollertastic though was that I found a cute new case for my phone!

I was pretty happy with that case, because it was cute but not TOO cute, and also form-fitting without adding bulk to the device. My previous case had that going on, too, but the molded plastic over the Sleep/Wake button seemed like it interfered with the button’s functionality. (Which may or may not have actually been the button wearing out on me–I don’t know! I had to replace the phone today!) I like this case better also though because it gives better open access to the top and bottom of the phone.

Only when we were aiming to get on the highway at last and head home did we realize that we had ERRED: i.e., we’d forgotten to visit a Timmy’s! Forgive us, Canada, for we did not actually indulge in Timbits! We’ll be making up for this next time we set foot in your lovely country, we promise!

Last but not least it’s worth mentioning that on the whole trip, on the way up and on the way back as well, Dara and I worked to get caught up on the Doctor Who Podcast! We’re big fans and quite enjoyed a marathon of listening to the podcast crew on the road. We’ll be doing more on our next road trip, to Clallam Bay, this coming weekend. Stand by for that report, O Internets!

AND! I was charmed to see that the Twitter account for Tourism Harrison, @harrisontourism, actually found my mention this morning of the posting I’d been doing. They quite liked my writeup! Which is all lovely, given that we enjoyed ourselves in Harrison immensely. And we will be coming back!

In which our heroine and supervillain hike around the lake, in which the mammoth makes a break for it (but is thankfully recovered!), in which the festival suffers an accident (which we do not see), and in which perfectly ridiculous amounts of fun are had seeing De Temps Antan–and then getting pics with them afterwards! With Jean-Claude!

END_OF_DOCUMENT_TOKEN_TO_BE_REPLACED

July 7, 2013 by Angela Korra'ti
About Me, Quebecois Music

In which our heroine and her supervillain spend their first full day in Harrison on beach exploration, music played and music watched, and lake wading! And in which De Temps Antan rocks the afternoon with sunglasses and a bouzouki that can goddamn roar!