Dara and I returned from Worldcon yesterday and I’m taking today off to decompress–because I spent the entire con pretty much working the NIWA table in the dealers’ room, and that’s dealing with a lot of people by my introvert standards. So I need some downtime!

Since I was at the NIWA table so much I actually wound up seeing very little of the convention. And I gotta say, we were totally spoiled for space at our table, occupying a corner booth as we did. We had a truly magnificent spread of books, with 37 different authors represented on the table! Seriously, check this out, this was the booth space we had to play with! (And you can guess which portion of the table was my favorite, I expect!)

(Putting in a More tag as this post is kind of long!) 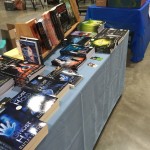 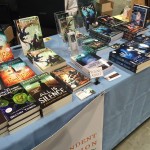 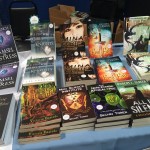 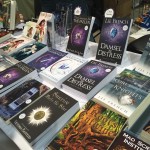 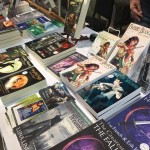 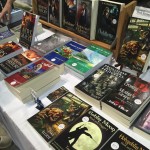 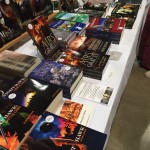 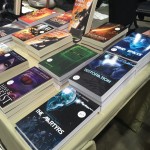 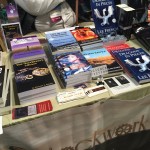 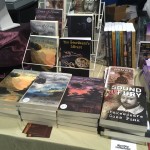 As I discovered at Norwescon, the thing I like about working a book table is talking to folks who stop to look at our stuff. Not only the people who actually buy things, but also the people who are potentially interested in joining NIWA (it’s fun to hear about what they want to write), and the people who possess skillsets of interest to indie writers (the editors, graphic artists, and book formatters who are looking for projects). I spoke with several folks who asked if I could relay their contact data to our group, which I will be happily doing.

It was very, very nice to finally meet M.M. Justus in person, since she and I have been chatting for ages, and she came into NIWA through me. Also highly entertaining to learn that Jeffrey Cook ALSO used to play on Two Moons MUSH!

And it was also very gratifying to have Japanese author Taiyo Fujii stop by our table and pick up the one middle-grade novel we had for sale: The Case of the Wilted Broccoli. He wanted to get it to read to his own kid, and to practice his English!

(I grabbed the last two copies of this myself, to pass on to a couple of my friends with children. I thought the cover was rather adorable, and the plot sounded fun too!)

I didn’t go to any panels, although I did take the time to go through the art show with Dara, and to cruise through the rest of the dealers’ room and see if there was anything I wanted. There wound up being two things I wanted: a mug with a monster face on it, and this mighty, MIGHTY squishable Cthulhu! 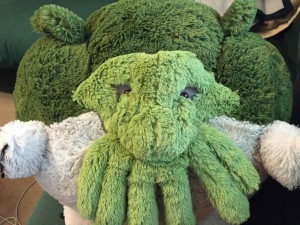 ALSO was highly entertained by an exchange I wound up having because of the last Boosting the Signal post! A reader dropped a comment on that one thanking me for the post, saying that she’d gotten that title as well as my own–and she noted that her roommate was selling jewelry at the con and that I should look for her. Turned out that the roommate was literally right around the corner from the NIWA booth, so I went over to say hi and to look at her wares. I wound up getting a nice little necklace that struck me as a potential Hawk amulet, ’cause, y’know, kinda had to, and the jeweler was happy to do a merch swap with me–print copies of Faerie Blood and Bone Walker in exchange for the necklace. The jeweler is Tamera Mickelson and you should go check out her stuff. 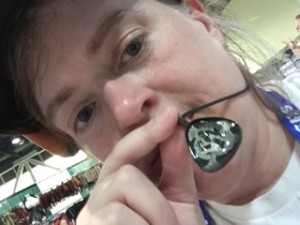 Elven Mages, I Will Find You

When I did venture out of the convention center, it was to either head back to the hotel room and have some quiet time (which was a decent little walk across a couple of bridges and through a nice little park), or to go out for dinner. Dara and I found the Suki Yaki Inn near our hotel, which was so good that I wound up eating there three different nights. They weren’t fast, but they were VERY tasty, and they did NOT skimp on the drinks.

The one major downer for me was the air quality, thanks to the wildfires raging all over the state. The air quality in Spokane was questionable the entire weekend, and on Friday in particular it got bad enough that dangerous smoke warnings were issued by the convention, telling everybody to stay indoors–not just the people who were sensitive to air quality issues. I broke out the inhaler and spent much of Friday evening walking around with a damp washcloth held over my face.

I missed the Masquerade because of going out to dinner with the NIWA crowd (and given that we were at the Suki Yaki Inn, I REGRET NOTHING). And Dara and I deliberately skipped the Hugos because we decided we didn’t want that kind of drama in our lives. But I did at least take the time to go peek in on the Montreal in 2017 bid party wake after they lost the site selection vote. They had decided that they wanted to still try to do something in honor of the anniversaries they wanted to celebrate at their con: Canada’s 150th anniversary, Montreal’s 375th, and the 50th anniversary of the 1967 World’s Fair.

So they started running an “adopt a bottle” program on their stock of booze (which, I daresay, was also motivated by “we don’t want to take all these bottles back across the border”). And, being the kind and beneficent souls we are, Dara and I promptly took two bottles of ice cider and a big bottle of the creme style of Sortilege off their hands. Because mmmmm Sortilege. And also yay, ice cider! We’d been wanting to try that ever since we heard about it, and we finally found some!

I also stopped at the Dublin in 2019 bid table and pre-supported them. I was bummed to discover I’d actually missed an Irish jam that they had at their bid party–only found out about that after the fact. Because while I’m not normally a party person, I will TOTALLY show up for a session.

And I pre-supported New Zealand in 2020, too. Because how can any self-respecting fan of the Lord of the Rings and Hobbit movies NOT pre-support New Zealand? (Well, a fan with enough income to reasonably save up to go there, anyway!) They handed out cute little plushy kiwis to everybody who pre-supported, so I put mine on my badge. I didn’t wind up getting nearly as splendid a chain of badge ribbons as many, but I did have a few by the end of the con! 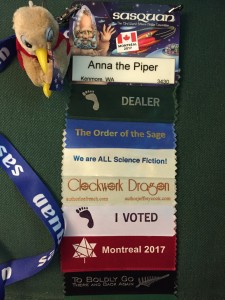 All in all I did have fun. Introvert Anna was still pretty introverted, but hey, I sold some books! And I ate some tasty food! And I did get to see my and Dara’s long-time friend Rod from Kentucky, as well as Cheryl and Jay who we also know via the Kentucky crowd (and Cheryl’s been awesome with supporting my work on the social networks, thanks Cheryl!) Also met Ingvar who follows me on Google+ (not to be confused with Yngvar who’s my long-time friend from Norway!), and who gave me and Dara a cute little carving of a raptor in flight. Because of naming our car Raptor 312, you see.

Dara has her own con report over here, with a bunch more pictures, including some that show what the smoky air actually looked like. Check those out!

Many congratulations to Helsinki for winning the site selection vote. I was bummed about Montreal losing, but on the other hand, hey, I’ve never been to Finland! And this’ll hopefully be an excellent opportunity to see both Yngvar and Janne, my and Dara’s Norwegian friends!

Lastly, hi to all who’ve been coming by my site to read up about my books. A lot of folks did perk up when I told them Faerie Blood and Bone Walker were on sale in digital form in honor of Worldcon, and a few others perked up as well when I pointed them at my Valor of the Healer postcards. So if you’re someone who said hi at the table and who came by to check out my work, or maybe if you’re someone who found the posters and postcards I left out on the freebie table and racks, hello there and thank you for coming by! And if you’ve chosen to buy my work, thank you and I hope you enjoy the reads!