Dara’s been keeping a sharp eye on the Hugos brouhaha the past few days. This past Saturday, she put up this report on how certain individuals apparently took it personally that they were being criticized for the behavior of certain other persons in their little coterie. Dara rightly calls this bullshit, because it is–because the Puppies recruited Day into their ranks. And they recruited the GamerGate crowd. And now they’re complaining and claiming that they have no control over the behavior of the “wild wolf” Day.

Sorry, but no. You don’t get to recruit the likes of Day into your ranks and then complain when people call you out on it. It is not only disingenuous, it’s also cowardly.

But of course that wasn’t all, either. Dara’s got another report up this morning, following up on the previous–in which it is declared that people who would vote NO AWARD rather than the Sad Puppies slate are not only assholes, they are also Leninist Communists. (Or Nazis, according to another commenter! So the people the Puppies don’t like are Nazis AND Communists!) Phrases like “cuddly pink fluffy cudgel of political correctness” and “flaming rage nozzles of tolerance” get thrown around. (Because apparently “tolerance” is a dirty word.)

Mr. Torgersen apparently also feels that people who support Chick-Fil-A are “heroes”, and that supporting a corporation known for blatant homophobia is the act of “free people”.

I’ve seen other posts in which larger names in the genre are calling for civility. George R.R. Martin and Mary Robinette Kowal are trying to do their part to fight the fires. Noble efforts on both their parts, and I particularly applaud Kowal for not only being willing to provide people supporting memberships to Worldcon, but specifically also recusing herself from any Hugo nominations next year. Likewise, I applaud those who are matching Kowal’s efforts and trying to broaden the pool of supporting memberships being offered to fans on tight budgets.

I’m all for civility. I’m for the ideal of SFdom being welcoming to all within its ranks. We are supposed to be the literature of ideas, after all, and ideas cannot thrive in an atmosphere of stagnation. We need to have our ideas challenged, and in order to do that, we need diversity in the ranks.

But here’s the thing–when some of those ranks are on record as not wanting women, people of color, or people of alternative sexualities in the clubhouse, when they specifically go out of their way to fight against such persons being included, and when they shriek that all who would stand in their way are Nazis and Communists and “Social Justice Warriors” and “CHORFs” and whatever other derogatory terms they dream up… my civility is spent. So are my tolerance and sympathy.

Politically disagreeing with me is one thing. Going out of your way to fight against my existence is another thing entirely.

Tolerance goes only so far. It presumes that all parties are at least willing to accept each other’s presence in the clubhouse. But this? This is spiteful little boys throwing tantrums that the girls and the black kids and the queer kids are in the clubhouse now too, and they want some of the punch and pie.

And hey. Pie is tasty. But we don’t have to fight over the pie. There is enough for all, people.

But if you want a slice of the pie, stop throwing tantrums. And stop trying to push the other kids back out of the clubhouse. It’s unworthy of children above the age of six, never mind grown men. It’s unworthy of the literature of ideas.

In closing, here, instead of a Sad Puppy, I offer this Happy Kitten instead. 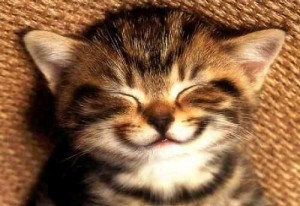 Announcements! The winner is…