things that are awesome

END_OF_DOCUMENT_TOKEN_TO_BE_REPLACED

We received not one, not two, but three packages yesterday, all of which deserve some shoutouts.

First of all, thank you to Scott in Kentucky who sent Dara and me a couple of pretty necklaces that he got from a vendor at a flea market local to him. The stones, he tells us, are unakite, and according to the vendor’s usual pagan/New-Age customers, they are intended for healing. Dara and I could use some healing, and this was a very sweet gesture on Scott’s part. 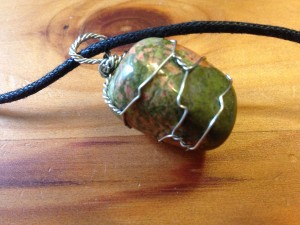 Secondly, Tiny!Flute has arrived! I am chagrined to discover that the current state of my healing abdomen pretty much dictates that I can’t carry coherent notes more than a few measures at a time so I can’t actually reasonably play this little guy yet. But quick experimentation suggests that he’s got a REAL nice voice on him. Dara tried him as well and smiled and said that he sounds like Popcorn. (Popcorn, y’all may remember, is the bamboo flute Dara lost when we lost her backpack on the way down to Oregon.) 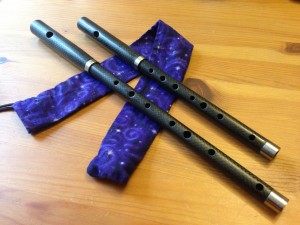 Last but most assuredly not least, my sister’s little girl made a special point of picking out a stuffed animal from her very own personal collection and sent it to Dara and me, after learning from her mommy that we’d both been not feeling very well lately! This is hands down the most adorable thing that has happened to me all year, and so I made a point of asking my sister to ask her daughter what the giraffe’s name was. Because if you’re going to have a giraffe come to live with you in your house, it’s VERY IMPORTANT to address the giraffe by the proper name!

And so, Internets, I’d like to introduce you all to Fluffy the Giraffe, now joining the Murkworks household. 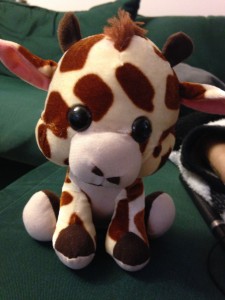 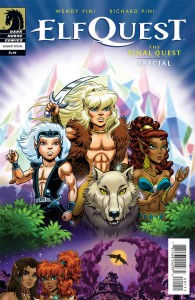 Yesterday was the anniversary of Elvis Presley’s death, and as many of y’all will know, Elvis was my very first musical fandom, the very first musician I ever adored. So naturally, I took it upon myself to post amusing Elvis-related things to the Intarwebz (such as a callback to last year when Alan Doyle sang “Can’t Help Falling in Love” and killed me DED FROM SWOON).

Then a Facebook friend (hi Venus!) sent me this! And this is the most OMG ADORABLE thing I have seen this entire week: a baby girl singing along with Elvis on “American Trilogy”. In no small part because it totally reminded me of how my dad used to swear up and down that among the first words I ever uttered were “Play more Elvis, Daddy!”

I’m not sure what slays me more, how she keeps going Daddy Daddy Daddy HI DADDY, how she then realizes there’s music happening and swaps back and forth, how she starts coming in on “look away”, the bit where she headbangs, or how she’s either conducting the orchestra or maybe playing imaginary timpani in the bridge leading up to the final chorus. <3

If this kid starts asking for Great Big Sea and Le Vent du Nord next, I’m going to have to have a word with Dara about my clones escaping into the wild too early. 😉

The good news: Plants Vs. Zombies 2 has finally shipped from PopCap!

The bad news: It’s iOS only, at least for now. I’ve been poking around and see at least one mention of a tweet from PopCap staff that indicates that they’re releasing to iOS first with other versions to follow later. (Source.) However, no word yet on when this is going to happen.

The good or bad news depending on your iOS device type: Apparently the game requires a front-facing camera. My friend Kaye on Facebook reported that she couldn’t install it on her first-gen iPad, because it complained about that lack of camera. Why in the world the game wants that I couldn’t tell you, but, be advised, those of you with older iOS devices.

The good or bad news depending on how you feel about free-to-play games: The iOS apps are free-to-play. For those of you unfamiliar with the term, that means you can install the games for free, but they’ll make their money selling you oodles of in-game powerups. According to what I’ve read, you are supposed to be able to play through the whole game without having to buy anything.

The HIGH-larious news: PopCap put a zombie ad on the Space Needle. BWAHAHAHAHA.

And, note to self: NO YOU MAY NOT DOWNLOAD THIS GAME UNTIL YOU FINISH AND TURN IN VENGEANCE OF THE HUNTER. JUST SAYIN’.

A little STOMPY for your Friday!

When I commit acts of musical fandom, I learn tunes (and have a tendency to pester fiddle and flute players).

When Dara commits acts of musical fandom, major cities are leveled and the Cascadia Mecha Militia is deployed! Ladies and gentlemen, mesdames et messieurs, I give you my belovedest supervillain’s latest composition: Kaiju Meat, her ode to all things Pacific Rim, written for this weekend’s Jaegercon on Tumblr!

I was up until stupid-o’clock in the morning between Monday night and Tuesday morning, along with several other teammates, launching a shiny new thing: we opened up our streaming games service, Big Fish Instant Games, for Canadian users!

So now, if you’re a PC user or an owner of an Android device in either the States or Canada, for a small monthly fee you can have access to any game in our streaming catalogue. You can save your progress and pick it up again across devices and computers, even! (It IS PC and Android only right now, folks, my apologies on that–as a Mac user and owner of iOS devices, I want to see us streaming games onto those platforms too! But we’re working on that part.)

Anyway, Canadians, go clickie and have a look! You don’t have to fork over any money just to try out the system. You can even play games for a short time without making an account, and if you like what you see, then you can make a trial account and have full access to all the games for a week. And look at it this way–if you subscribe, you can consider it a small loan to me, given the high likelihood I’ll be channeling that money right back into fine Canadian traditional music, Montreal-style bagels, and Growers cider. ;D Everybody wins!