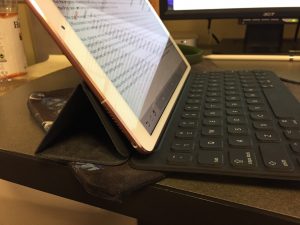 Every new January for me means the coming of my birthday! This year, since I got a nice yearly bonus from the day job, I treated myself to a birthday present: a new iPad Pro. Today on Here Be Magic, the group blog I participate in, I’ve got a post up about what it’s like to use this device to write on. Here on my own site, I’d like to expand on that somewhat and talk about what I like about this device so far, and why I decided to get it.

Long post is long! The rest is behind the cut.

Which specific Pro I got

I got the smaller one, the one with a 10.5 inch screen. Length and width wise, it’s just ever so slightly bigger than my iPad Air 2. I went with this size just because the larger ones struck me as too large and cumbersome for me to comfortably use.

I also got one in rose gold. By which I mean, ‘pink’. Which is arguably a femme choice, and I’m not terribly femme. But every so often I do like to defy expectations. 😀

Thanks to the color, and its contrast with the gray Smart Keyboard, I’ve dubbed this device Moonshade. (In keeping with my personal tradition of naming electronics after Elfquest characters, doncha know.)

Speaking of the Smart Keyboard

Last month, Dara and I went phone-window-shopping at the Apple Store, and while we were there, I played with one of the Smart Keyboards. I liked it well enough at the time that it became a big contributing factor to my purchase.

I go into more detail about this on the Here Be Magic post, as it specifically pertains to the experience of using the device for writing. So I won’t repeat myself in this post.

Before I committed to buying the Pro, I looked on Apple’s page for comparing the various iPad models. According to said page, the current non-Pro iPad still has better stats than my iPad Air 2, in terms of what generation of processor it’s running, screen resolution, and such.

What ultimately decided me was the additional step up of the hardware on the Pro. Given that in addition to writing I do play a lot of games on my mobile devices, the best possible hardware seemed like a no-brainer. It means I’ll have that much longer to enjoy playing my day job’s games at top speed, and with a very nice screen indeed.

Ability to use the Apple Pencil

I’m not an artist. But I do have a small amount of history of trying to do sketches, and back when I still lived in Kentucky and participated in a weekly RPG group, one of the things I enjoyed doing was sketching pictures on my character sheets. This was fun during our short-lived Elfquest campaign, where I invented the original version of the character I’d eventually go on to play on Two Moons MUSH as my primary alt: Rillwhisper, chieftess of the Willowholt. I hand-drew my character sheet pic of her, using Rillfisher from the actual series as a model.

To this day I have a collection of colored pencils I never use, as well as a few pens and non-colored pencils. With the rise of adult coloring books as a fad, I’ve halfway considered breaking out those old pencils again, but couldn’t ever quite bring myself to consider buying print coloring books.

The iPad Pro, however, does talk to the Apple Pencil. And sketching and coloring apps are a thing. I’ve already experimented with a couple, most notably Procreate, which comes highly recommended by multiple artistically-inclined friends of mine. I’ve practiced sketching with the Pencil, and I’m pleased to report that it is indeed fun and I hope to do more of it.

Here’s the sketch I did in Procreate! This was done using a previous picture of George as a model. 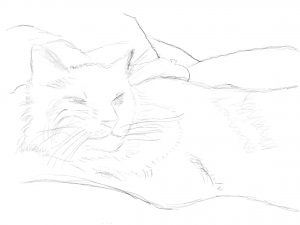 There are certainly other uses for the Pencil—note-taking, for example. I’m not yet convinced that that’s something I’ll want to do, but I’ve also experimented with that. And it is pretty awesome to be able to write on the screen. Even if it’d be kind of hilarious if doing that actually helped reverse the trend in recent years of my handwriting going to pot from lack of practice.

Writing on the Pro

Historically, screens on mobile devices have been too small for me to write on them effectively. The lack of a separate keyboard means some of the screen real estate is devoted to the on-screen keyboard, which doesn’t leave me much to work with. When I’m writing brand new text, this is less of a problem. But if I’m editing, which may require me to move text around, reduced screen space makes the process a lot more difficult. I need to see some surrounding text for whatever I’m working on, just to get suitable context.

Writing on my iPhone is therefore right out. On iPads, I need a separate keyboard. The Apple Bluetooth keyboard I’ve worked with is a separate object, large enough to be awkward to carry around in a backpack. When I took it with me on our Canada trip in 2012, jostled by being carried in my backpack, it kept triggering attempts to play things in my iTunes library!

I’ve also tried an iPad-case-with-keyboard called the Canvas. This is a better experience than a completely separate keyboard, just for solving the “second object” and “potential key jostling” problems. But it is kind of bulky. So while I was happy to take it on my Quebec trip this past summer, it isn’t something I want to carry around on my daily commute.

All of which means, ultimately, that my iPad hasn’t been something I’ve wanted to write on on a daily basis. With the Pro, however, I’m feeling like that’s going to change.

Part of this is due to the nicer experience of the Smart Keyboard. But part of it’s also due to my decision to keep social media apps off it. And while I’ve put a few games and art-related apps on it, those will likewise have notifications turned off. My hope here is that the Pro will therefore serve as a much more focused writing experience.

One last thing I wanted in this new iPad was cellular access. My Air 2 is wifi-only, as was the original iPad 2 I bought (and handed off to Paul when I got the Air). But now that I’ve been selling books at conventions, I’ve been discovering that I am seldom guaranteed wifi access in a convention dealers’ room. This has therefore restricted me to doing Square transactions on my phone.

Which, mind you, is still perfectly doable. But it’ll be nice to be able to do Square transactions on an iPad as well. The Square app’s nicer to use on a bigger screen, not only for me, but also for people who might need to finger-sign after I’ve swiped their cards through the reader.

But, given that my data usage needs for this are entirely driven by the one or two times a year I sell books, I bought the smallest possible data plan for it. And most of the time it’ll live in airplane mode and get all its data over wifi. I’ll turn on the cellular access only in dealers’ rooms at cons.

Relatedly, it amuses me deeply that the Pro now has its very own phone number, even though it’s not actually a phone and to the best of my knowledge, cannot be called like one. Also, now I know how to install and set up a SIM card.

Last but not least, a few words about apps I’ve put on the Pro and some other general expectations for how I’ll use it.

Here is what Waterlogue did to a picture of George! 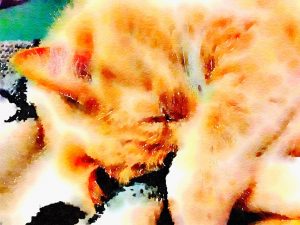 And that’s it. Right now I don’t have immediate plans to install anything else. Which means I’ve got acres of space on the thing; it can hold my entire music collection, which impresses me. I may periodically use it to watch videos, particularly if I take it on vacations. But that’ll be entirely driven by whatever I have locally stored on the device. I won’t be streaming video on its limited data plan.

Long post is long! But as y’all know, Internets, I am a giant nerd and a writer. This is what happens when I get hold of a shiny new toy to play with. I write lots of words about it!

The tl;dr version: I’m quite happy with this purchase! I’m particularly looking forward to seeing how it changes my writing routine in 2018. Keep checking back with me. I’m sure I’ll have more to say after I’ve used it for a while! 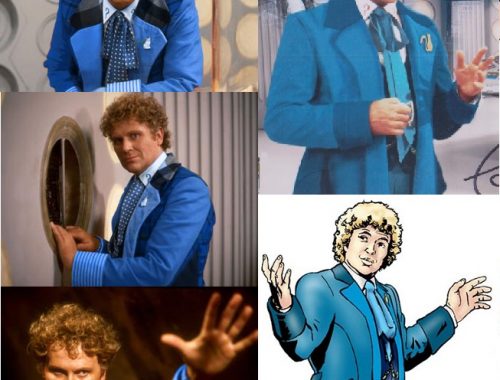