Bone Walker, Queen of Souls, Victory of the Hawk

Victory of the Hawk (and Kickstarter) update

And now, a long overdue update on Victory of the Hawk! AND Kickstarter stuff!

Have been running annoyingly behind on getting this monster done, and managed to miss most of VCON for the second year in a row working on catching up. Got to the point that now I’m within scope for getting this monster’s first draft done by the end of this week, and shortly thereafter, there will be development edits.

How fast I can charge through those will, in turn, impact how fast I can charge through line edits. If all goes well, I could conceivably be done beating on this book by the end of the month. I’d like to be done before I scamper up to Canada again in November, this time for Operation SWING!, in which there will be ridiculous amounts of De Temps Antan!

If I’m done with edits on Victory by then, I’ll be swinging around to finally working on the edits on Bone Walker. When I go up to Canada for the De Temps Antan shows, I’ll be taking the entire week off–and between the two shows, I’ll be holed up in Cumberland working on edits on whatever’s popped next off the queue.

Once I can finally actually free up enough brain for the Bone Walker edits, they should go reasonably quickly since they’re all line-level edits, and I’m not going to be making any structural changes to the book at this point.

When Bone Walker‘s edits are finished, Dara and I will work on layout and on the design of the cover. And when that happens, I’ll have a better idea of when the final ebook and print editions will be deployed. The likely timeframe for this is early 2015, at this point. I’d like to have Bone Walker out before Victory is due to drop in April 2015.

Meanwhile, Dara has been doing a hard push to finish up the Bone Walker soundtrack. She’s very close to finishing the musical bits, although she and I still need to do the recordings for the readings I’ll be doing as accompaniment to the musical tracks. My ability to musically participate in the album has had to fall to the wayside, due to my having to focus on writing actual words, about which I’m sad. But on the other hand, we’ve gotten in excellent people to work with Dara. Especially Alexander James friggin’ Adams, about which I am not sad in the slightest.

When Bone Walker is cleared off my plate, I’ll be turning my attention to finishing up the novellas in the Warder universe, also due to Kickstarter backers. All three of these are still untitled, but to refresh your all’s memories, they are:

And once all THIS is done, well, we’ll see what happens next. What’s most likely to pop off the queue is the long-overdue Queen of Souls, which needs to be cleaned up so I can try to query it somewhere.

Wish me luck, folks. The rest of this year’s going to be busy, and next year promises to be more of the same! 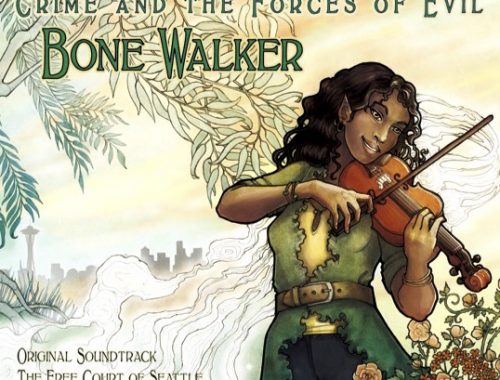