So as I’ve been gushing all over the place, this is the week that De Temps Antan release their brand new album, Ce monde ici-bas! And if you’ve read my post from earlier today, it should surprise you not in the slightest that yep, I very much like this album and I endorse its immediate purchase for anybody with any interest whatsoever in Quebecois traditional music. 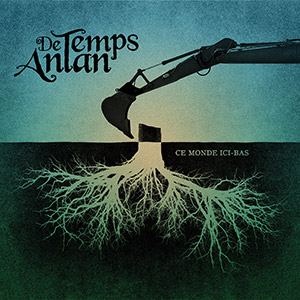 This is DTA’s third album, and as often seems to be the case when a band reaches album #3, there’s a more mature, polished sound here. I can’t confirm this for sure yet because I haven’t seen credits for the disc, but on my first pass through I heard what sounded like several guest musicians. This stood out most clearly on the vocals–especially on track three, more on this–but I’m pretty sure I also heard some bass guitar and some extra fiddle in there as well. This took me to a musical place I’ve been to before when listening to La Bottine Souriante’s album J’ai jamais tant ri, the one where the DTA boys were all in La Bottine at the same time and so the album comes out sounding like DTA + a horn section. There’s no horn on this new album, but still, the overall size of the sound was close. This is not a bad thing in the slightest, but it was a bit startling when I’m used to hearing DTA all by themselves.

Track by track reactions behind the fold!

“Mépriseuse de garçons”: This one starts right out of the gate with some mouth harp, some slicing on the fiddle, and Éric’s bouzouki coming in low and dark. In other words, about as De Temps Antan as it’s possible to get without a harmonica involved. The boys are all in excellent voice, and the energy lets you know it’s meaning business. I was vaguely surprised to not hear podorythmie, just a steady rhythm right on the beat coming in a bit into the song–possibly somebody just tapping a foot, possibly a drum, dunno. There’s also either a guitar or a bass coming in towards the end, too. And I hear what sounds like at least one extra fiddle and the guest vocals coming in towards the end. Big strong song in general.

“Medley des couches”: First instrumental on the disc. Amusingly, this starts with what sounds to my ears like a bit of muted more old-school-feeling reel, which abruptly quits about 15 seconds in–when the REAL reel (aheh) starts. Whatever the first tune in this one is, it’s interesting, with notably different flavors in the A and B parts, first high and then low. Then you get a couple more tunes in quick succession, a fast minor, and then back over to major for tune #3, driven by harmonica and guitar. Tune #4 (if I’m counting tunes right here) is fiddle–and there’s at least one extra fiddle in there, unless Pierre-Luc’s accordion is doing a fiddle impersonation! And there may be a fifth tune in here? Unless tune #4 actually has a C and D part. It’d be interesting to see the sheet music for this. Long story short: a lot of fast-moving tunes here!

“Adieu donc cher cœur”: Hands down my favorite track on the album. Guest vocals bring us in with a high sweet female voice on top of Éric’s wistful first verse, a lovely vocal contrast. But the real fun of this track is that I was all “yeah, got it, moody Éric song, I know where this is going”–except I didn’t. Right around the 3:50 mark or so it takes an abruptly brighter turn, and in the last minute, we get turluttes! In harmony! And I’m pretty damn sure I hear more than just three voices, because oh god, it’s pretty, and big, and then a descant comes in! Gorgeous! I’d love to be in a live crowd doing this if the audience could pull off that descant! Also, Blonde Elf Needs Lyrics Badly. I may need to learn this one on the guitar.

(Note: I’m seeing on DTA’s own Facebook page that the female vocalist here is someone called ‘Jorane’. I need to find out who that is. She sounded great!)

“Refaire le monde”: This one lets all three boys take turns with the lead, and it’s a great showcase of their various voices. I’d definitely need to see the lyrics to this, too, because they’re whipping out these lyrics like machine-gun fire and I have no earthly idea what any of them are singing, *lol*. But yeah. Seriously stompy. I’ll expect to hear this one at my next DTA show, I think.

“L’américa”: The title of this one naturally leads me to wonder what it’s about. We’ve got a slower tempo here, and somebody whose voice I don’t immediately recognize taking the lead on the first verse. Then Éric takes over the lead, though his voice is almost overwhelmed by the resonance of the instruments around him. And whoever he is from the first verse comes back in again later; I really want to see the credits on this one, as well as the lyrics. I want to know who that is on the guest lead. Also very curious about the mix of the sound, since yeah, this is coming across big and echoey and full, and the instruments have more weight than the vocals.

“Les 3 archets”: Another instrumental, this one powered by fiddle and harmonica as it fires up, before the guitar comes in. I like this one quite a bit. Translating the title gets me “the three bows”, which is kind of funny given that this is one of the tracks I don’t hear extra musicians on. Of course, given how I’ve already expressed how the DTA boys do a damn fine job of sounding like they’re a bigger band than they actually are, take that with a grain of salt. And whatever tune is last in the set, it’s got an almost La-Bottine-esque flavor to it, even though it’s not actually “Sheepskin and Beeswax”. Because welcome to trad music, where one tune often sounds like another!

“Valse St-Sévère”: Two instrumentals in a row, but this one is a distinct mood shift, so that’s okay! Nice sweet waltz, and I’m pretty sure this is in a mixolydian key, but don’t quote me on that–it’s got that mix sort of feel to it, though. This may or may not be one I heard the boys do in Harrison, maybe the one André introduced as having been played at his wedding. It sounds familiar, and that may be why.

“Méli-mélo”: Back to the Pierre-Luc-driven vocals with this one, with a bit of a lighter touch and a lighter mood. Mostly this one’s all about Pierre-Luc showing off his lead singing, though there’s a loverly little fiddle and accordion bridge to recommend this ‘un. Then the mouth harp comes in later to add a bit more bite, and here’s the fun question: who’s playing it? Because it’s totally layered in on top of Pierre-Luc’s singing, so either they’re doing engineering tricks with him doing the mouth harp on top of his own vocals, or else somebody else jumped in. Be fun to know which.

“Jolie et maquillée”: This one really wants to fight with “Adieu donc cher cœur” for my favorite on the album, ’cause as y’all know by now, I’m a sucker for anything where Éric takes the lead on the vocals. Especially if he’s going to whip out tantalizing little bits of turlutte at the end of verses, and the others are going to harmonize with him on those, and, well, yum. (Not immediately, partway into the song, but listen for that high harmony–probably André? Yow!) And way to harmonize coming out of the slowing of the tempo, guys! Also, this one went in a direction I didn’t expect it to go in, coming out of that slowing of the tempo. I totally expected it to pick up again and bring the vocals back in completely, but instead it goes into a full swing through a reel for the outro. Points for surprising me there!

“Un homme sans pareil”: Back to Pierre-Luc, again with a lighter touch to the tempo and the beat, though I like how the melody line on this one does interesting dips into minor with an otherwise major-sounding melody line. Pierre-Luc is really good at the songs where he’s cramming a lot of syllables into a melody, isn’t he?

And last but not least, “Matin d’hiver”, the final instrumental–which is not to be confused with “Manteau d’hiver”, my hands-down all-time favorite Le Vent du Nord instrumental. But with the titles so similar, I can’t help but think of that other tune, too. We start off with some nice slides out of the guitar, and head into the main body of the tune with fiddle and accordion trading back and forth on top of Éric’s guitar. On the bridge we abruptly have most of the instrumentation fall away, and we get back some of the echo from the previous tracks, giving a sense of size and space–and it’s here that the tune’s title kicks in for me, because I start thinking of the sun coming up on a winter morning and beginning to brighten the snowy land. We fade out on that, and I’m thinking of sunlight on the snow. Nice.

Also, quick translation attempt on “L’america” ends with saying (at least according to Google Translate) “America is not called America, it’s called the destruction and loss of Quebecers”. Ahh yeah, that’s where I thought that was going. GT’s real rough translation of the song gives me an overall theme of “guy has a girl in Quebec, guy moves to America, guy gets an American girl, Quebec girl’s life is ruined”. Definitely a more tart song than, oh, say, Great Big Sea’s “Yankee Sailor”, which is the same situation only with the genders reversed (i.e., Newfoundland boy sees an American sailor romance his girl out from under him).

Being a fan of music by bands outside my country, and the occasionally tart consequences thereof, let me show you it! (Not that I’m entirely arguing. I note I’m the wife of a girl with a song called “Sick of America”, and you don’t get much more tart than that.) (Which is about as political as I’m going to get in this post.)

ANYWAY, long short short, buy the album, mmkay? I mean, even mammoths like De Temps Antan! (She said, shamelessly using an excuse to repost some of her best pics from Harrison Hot Springs!) 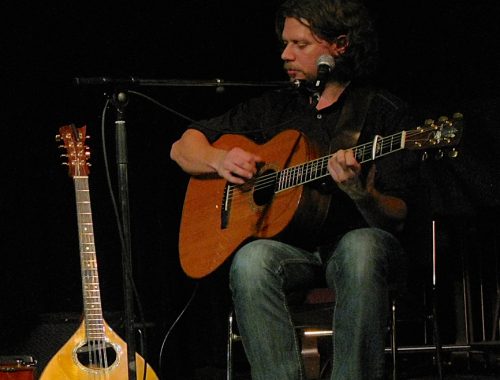