I begin to feel like I’m getting my feet under me at our local Quebecois session! And that every so often, my feet can actually do something interesting! Literally and figuratively. ‘Cause really, at a Quebec session, I want my hands and my feet to be doing interesting things. 😉

Tonight though was mostly about the hands. I did in fact play my actual flute in front of actual people! Since most of what I’ve been able to learn so far has been slower things friendlier to the flute and to my skill level at picking up stuff by ear (read: not happening in an active session, not yet), I’m still mostly hanging back and just trying to figure out the structures of tunes and get familiar with the style of how they’re played. But tonight, when asked to play something, I was able to more or less play through André Brunet’s “Ciel d’Automne”, and I only sorta kinda maybe messed it up in only a few places. *^_^*;; But everybody was very encouraging, and one of the gents at the session told me he liked my flute’s voice.

Also, I got to show off my new teeny guitar and let Dejah see that why yes, actually, for such a little guitar he actually does have a good voice on him, and surprisingly responsive strings. Courtesy of Dejah I also learned a new guitar term: parlor guitars, which are smaller-bodied guitars. Like Ti-Jéan, really! So that was all lovely.

Part of our session tonight was outside on a deck, which was also awesome. We were overlooking a bit of a nearby park, so joggers were going by and clapping as they saw us playing! I hung out out there until it got a little cold and pollen started irritating my throat; then, inside, I got to listen in on a lovely conversation about crankies. Then everybody else came in and Dejah showed off her shiny new cranky, telling a great little story about four French Canadian lumberjacks who want to go to a party in Montreal, and who make a bargain with the Devil to borrow his magic flying canoe (like ya DO) so they can get there. I was particularly charmed by the lumberjacks all having different colored caps and big beards, so of course where I go with this is the dwarves in The Hobbit, so I’m pointing at the cranky art and going “So this is Dori, Nori, Ori, and Jean-Baptiste?” 😉

Dejah’s dad Louis also very, very kindly provided me a couple of PDFs of tunes that were played tonight, which I deeply appreciated. I overheard the names of three other tunes that were mentioned, and promptly discovered that I either had them immediately available in the store of tunes I’ve amassed so far, or that I could immediately find them on thesession.org.

Also deeply pleased by another reminder that why yes, I do in fact need to be learning Genticorum’s “Valse de poeles”, which was called out to me tonight as something that would be very friendly to me to learn. I do not actually have this tune in my store of tunes, so I’m going to have to do something ambitious and see if I can learn it by ear off the recording on the most excellent album Nagez Rameurs. 😀

(Because as I’ve previously lamented, I am NOT good at picking up stuff by ear quickly. However, I have learned that I can do it slowly. Alexandre of Genticorum helped me demonstrate this to myself, that if somebody sits me down and feeds me a tune in bits and pieces I can, in fact, pick it up. But I can’t do it quickly. This is why I have to slow stuff down in Tempo Slow, too, if I don’t have an actual live musician in front of me to learn from. I occasionally get bits and pieces just trying to listen in session, though. Kind of like bits and pieces of French firing off in my brain as I study, really. I’m hoping as I learn more tunes I’ll start getting more of these bits and pieces firing off faster and maybe eventually I will in fact be able to whip out a tune as I’m hearing it.)

And then I was very kindly offered a ride home so I wouldn’t have to take the bus. And “Maison de glacé” was played, and I got to go OH HEY AWESOME I KNOW THAT ONE, because yay tune by Réjean Brunet! \0/ So I played my actual flute in front of actual people TWICE! Go me! And the Sheepskin Reel was played, better known by me as BEST GODDAMN LA BOTTINE SOURIANTE TUNE EVER. And I overheard three other tunes identified, which I was able to immediately find either in my personal tunes store or on thesession.org: Valse des Petites Jeunes Filles, Valse des Jouets, and Reel à Toto. 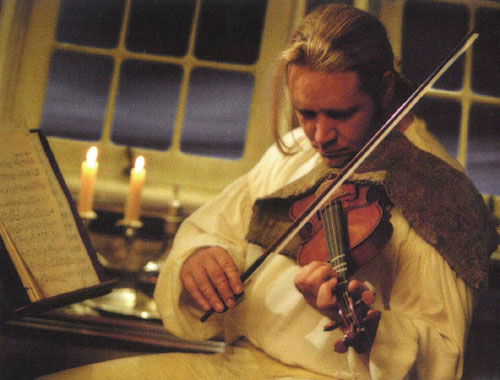 Fiddle geekery, and new question for the string players