With two brand new flutes to break in, I’ve found myself wanting to practice as well as write for the last couple of nights, and so tonight I’m doing active tune work. This means trying out all previously learned tunes on both the new instruments, as well as seeing which of the next ones work better on which instrument.

Here are an assortment of things I have thus learned.

One, there is a certain pure, clear tone that a properly played piccolo can make. I’m NOT good enough to do it consistently, but I can get there. It requires not only a good embouchure, but also that you make sure and drink enough water, which is a problem in our fairly dry, cold house! I’m learning from Chirp, though, that if I play Chirp correctly, I can in fact approach a piccolo-like tone on it. Which is pretty impressive given that Chirp is made of applewood.

Two, I like the Lisdoonvarna/Swallow Tail Jig/Morrison’s set better on Chirp than I do on the new big flute. But I like Blarney Pilgrim better on the big flute, and will probably also like Da Slockit Light and Si Bheag Si Mhor better on that one as well.

Three, I am more nimble on Chirp, unsurprisingly, since Chirp is piccolo-sized. Even though the big flute is intended for “small hands”, it’s still a bigger instrument than I’ve been used to playing for a while, and it’ll take me a bit to work back up into it. I cannot yet achieve that purity of tone I was talking about above on the big flute, not yet, not while I’m trying to also play quickly.

Four, I’m playing with Apples in Winter and Cliffs of Moher tonight, and am learning from both of these tunes that I’m trying to punch their primary beats too hard. They both want to flow better than I’m letting them do. I need to work on that. I can pick out both tunes fairly easily on the sheet music, but that’s not the same thing. Reading off the sheet music is for purposes of just learning the tunes. Finding their music, i.e., making them actually sound good, is another question entirely. I’m still working on a lot of that with all of these tunes I’m trying to learn.

Fifth, I’m also playing with Jig of Slurs, in no small part due to my interest in the “Fortierville” set on La Volée d’Castors’ so very awesome live album–and while I’m starting to get Jig of Slurs down at least as a tune, again, it’s going to be a bit before I can whip through this thing as music. Especially if I want to play along with the La Volée recording. Which I DO. Relatedly, I have also observed that at least based on comparison to that recording, I’ve been playing Chirp kind of flat.

Newfoundland tunes hunt for the weekend 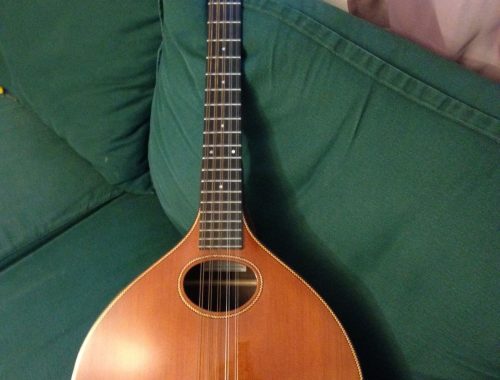