In which our heroine is super-late posting the last bit of the concert writeup from the 12th, she admits! But I beg your indulgence, my fellow GBS fans, for lo, I have been stricken this last week or so with the plague. STRICKEN, I tell you. Handsome and talented as The Doyle is, not even he can make me string coherent thoughts together when I’m in a Sudafed-and-Nyquil-induced coma. And I’m assuming y’all want me to finish this report off with something a bit more substantial than “mmmm Alan is so pretty mmmm”, anyway!

That said, Alan was awfully damned pretty, in a rugged and manly flannel-wearing sort of way. As previously mentioned, I know, but it bears repeating. Along with the one good photo we got of him! Yeah, I know that’s a first set photo. I don’t care. 😉 It gets me nicely back into the mood for describing the second set of the evening!

I think at this point “Love Me Tonight” is possibly my favorite song off of Fortune’s Favour–mostly because while I do like several of the other songs on that album, this is for me the most singable. And it still presents very well in concert, and very strongly as a set opener. Which probably contributed to Alan’s high spirits afterwards as he yelled, “Make some noise for the opening act! They were pretty awesome!” Hee hee hee.

Following up the first track of that album, they did the first track off the new album: “Long Life (Where Did You Go)”. This is not my favorite of Safe Upon the Shore–that honor goes to the title track–but I’m very fond of this one, and again, it presents very well in concert.

Next up: “Ferryland Sealer”. Or, as we like to call it at the Murkworks, “The Whack the Baby Seals On the Head Song”! (We’re aware this isn’t terribly politically correct in the Pacific Northwest, yes. But what can we say? The song’s so damned CATCHY.)

In a distinct change of pace, “England” came next, and that’s always a lovely thing to hear done live. This time was no exception, and Bob was splendid on the whistle solo.

Yet another change of pace (the B’ys had quite the bouncing back and forth of pace going on during this stretch of the show, I’m tellin’ ya) brought us “When I Am King”, Alan on the Les Paul, and proclaiming to us all “I feel like a ROCK STAR!” He demonstrated this hamming it up on the solo, too.

Séan tore through “Gallows Pole” like a storm tears through the Midwest, of which I now must note that I forgot to tell that the reason his version sounds all Led-Zeppelin-y is that, indeed, it’s Led Zeppelin’s arrangement. Since she actually mentioned it to me during the show, heh. I’m pretty sure I remarked on this in a previous show writeup, but I’ll go ahead and say it again here for anyone who might find this a point of interest.

As always, it was a treat to have “Scolding Wife” on the set list, and this time around, in Séan’s verse, he was caught by the accordion. 😉

The banjo came out again at this point, making arguably the most times I’ve ever seen Alan Doyle wielding a banjo in a single concert. (I feel it therefore my personal responsibility to note that this has made the banjo Infinitely Cooler in my estimation, and shall brook NO FURTHER CRITICISM of the banjo in my presence. If The Doyle plays it, it’s appropriately Awesome. There. I’ve said it!) Not that we actually went directly into a song involving that banjo, though–because the B’ys proceeded to elaborate upon the theme of “questionable marriages”, and did an extended improv upon what I believe was the song “No Woman No Cry”, by Bob Marley. Which is nicely in keeping with previous reggae-flavored improvs they’ve done before, and after which Séan innocently inquired, “You were saying, Alan?” That, of course, led into more improv, on “The First Cut is the Deepest”.

All of which was delightfully giggleworthy, and a fine example of why it’s really best to get the full Great Big Sea experience at a live show.

Eventually they did actually get around to another song–which was, unsurprisingly (given the banjo and all), “Hit the Ground and Run”. Which, after all, tied much better in with the whole theme of questionable marriages. Also: mad props to Bob for the harmonica solo!

After that Alan asserted that “I think it’s going very well” (he says that a lot, but happily, he’s generally always right), and cracked jokes about Great Big Sea playing the Tractor Tavern in 1926. (If they played the Tractor, it was well before when I joined in on the fandom, but I’d be interested in knowing how far back that might actually have been!) They did also do a lovely callout back to a venue they’ve played that I do have a connection to, i.e., Chateau Ste. Michelle.

We got the slow version of “Sea of No Cares”–again, always nice, and I think this has actually surpassed the studio version for me as my preferred version.

Then, more banter. Cracks about visiting Séan, as are customary, although this time Séan warned us it would be BYOB, Bring Your Own Beagle. (Which should, of course, make all of us who’ve been following the posts on greatbigsea.com and greatbigsean.com give it up for Tosh!) And some gentleman in the audience yelled out something I didn’t make out, but it made Alan promptly pipe up, “That lady has the deepest voice in the room!” Cracks were made as well about “the leprechauns” being out.

And, furthermore, Alan pointed out that we’d gotten too deep into the set list without a song from BOB. Which, of course, led us into “Helmethead”.

According to my hastily scribbled notes (and by this point in the show my handwriting was getting more and more randomly sized on the page), after that was when Alan actually kissed a girl’s hand, or so it looked like from where I was back on row M! Aww. (heart heart heart)

Then, finally, the home stretch: “Consequence Free” and “Mari-Mac”. And. Oh. My. God. This was hands down the fastest I’ve ever heard them roar out “Mari-Mac” that I can ever remember, and I say this as a veteran of ten years of Great Big Sea concerts (minus the Great Big Famine of 2005). I was whomperjawed. And grinning like crazy, since I mean damn, it’s great to know that even after ten years of concerts, my B’ys can still blow me away like that.

Encore #1 gave us “End of the World”, with a surprise giggle of an “Ode to Joy” solo in the middle; “Excursion Around the Bay”, with suspicious goings-on involving Murray, Kris, and the buttons of Murray’s shirt; and, of course, the “last chance to dance”, the Fortune Set.

Encore #2 started off with “Something Beautiful”, which is very worth mentioning here because earlier that day I’d seen Sara ask Alan on Twitter if they could do that song that night. Which means he must have seen the tweet, and, well, awww.

And, last but not least, after an extended “Oh Seattle” improv in which our fair city is described as “not as rainy as they think” and the obligatory band intro (with Murray called out as being “on the sexy bass”, we finished off the evening with “Old Black Rum”.

On the way out a gentleman in the row ahead of us turned to me and said “Are you the famous Anna the Piper?” To which I blinked and went, “Uh, yeah, wait, I’m ‘famous’?” He said his wife Lisa had read my show posts before on the OKP, and I mention this now in case Lisa finds this post. Because apparently I have a rep I need to live up to, now!

I must finish off with a callout for all the folks who and I hung out with, however briefly, at Kells after the show. We really, REALLY wanted to hang out longer than we did, but the noise level in the place was just too much. And not at all the way I wanted to end the evening anyway, after an earful of Great Big Sea. We’ll try again next time, oh my yes. Love y’all and see you at the next show! 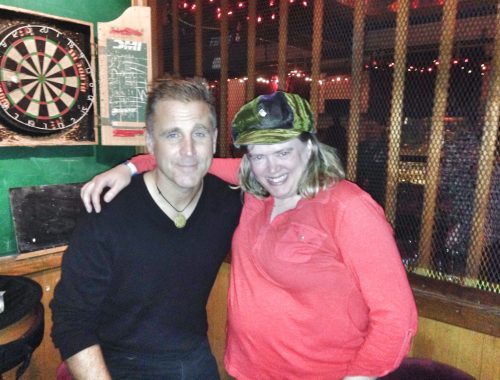